Last week, I had the opportunity to show my published and soon-to-be published pieces to my work colleagues. Some of them were aware of my writing through reading this page, while it was news to others.

I don’t talk about my fiction writing much when I’m doing my day job. Although it certainly isn’t a secret, I believe there is a time and a place for promotion, and I was given that time and place on Thursday lunchtime, so I took advantage of it.

On Twitter and Facebook, it’s particularly important to keep a balance between ordinary updates and promotional copy. How often have you seen an account post exactly the same message four or five times a day? It makes people switch off, like that one individual you avoid at the party as you know they’ll talk about their pet subject ceaselessly. Besides, if you say everything upfront, what is there left to have a conversation about?

Two great places for advice about promotion – and there are dozens of others – include the writer Rayne Hall, and the marketer Wilco Wings whose advice can be adapted for writers.

And now I have your attention through our implied conversation, it’s time to launch into the self-promotion.

To date, three of my short stories have appeared in the following anthologies: Because of What Happened by The Fiction Desk, FourW Twenty-Four by Booranga Writers’ Centre (I’m not credited on the website, only in the book), and Alternate Hilarities by Strange Musings Press. While looking out materials for my work event, it seems I’ve misplaced my copy of Because of What Happened, so I’ll have to hunt it down like JR Hartley and his book about fly fishing.

I’m also due to have two poems published in an upcoming anthology called Seagate III when the last tranche of funding comes through, and one in a promotional leaflet for the MLitt Writing Practice and Study programme at the University of Dundee.

By coincidence, I received an e-mail last week from Giovanni Valentino, editor of Alternate Hilarities. In each of his anthologies, he likes to run a reprint from the magazine of the same name from the 1990s, but it’s becoming harder and harder to find the authors.

To this end, he’s asking the Internet for help. On the off-chance that you’re one of the following people, or that you know their whereabouts, please e-mail him forthwith at giovanni.valentino@strangemusingspress.com.

For those of you who enjoyed the main event in November, we’re now nearly a week into Camp NaNoWriMo. This is an offshoot project where you have a free choice of what you want to work on, and you can set your own word target from 10,000 upwards. However, this is not what I want to discuss today.

One of our group members keeps a WordPress blog about her experience of moving to Scotland, from eating ice cream on a cold day to voting in last September’s independence referendum. Indeed, we boast a number of members from other countries.

There’s a joke often repeated that there is no such thing as American English, there is English and then there are mistakes. Joke or not, I find it difficult to agree with this statement, as there are so many variations of English even as you travel within the same country. For proof of this conjecture, just ask people on your favourite social media site what they call the end slice of a loaf of bread and watch the arguments come to a head.

Regular readers will know that I’ve so far been published in three countries: England, Australia, and the USA. Sometimes when I send to US publications, I change the spelling and grammar appropriately, with guidance from Microsoft Word and my own knowledge of Hollywood movie dialogue. This isn’t, I admit, a perfect system. And yet the one story published there is written in British English, and that’s because the protagonist is obsessed with acronyms, and changing the location would mean rewriting those acronyms, so the Britishisms stayed accordingly.

I know virtually nothing about Australian English, so I stick with my usual spelling and syntax. Here’s where to buy FourW Twenty-Four containing my story, although they’ve omitted my name from the website. I made reference to a motorway, whereas a quick Internet search suggests that highway or freeway might be more appropriate. The type of road is not a major plot point in this piece, nor does the action take place in a specific locality, but I know a few expats who can advise me for next time.

While looking up these links, I discovered that another Gavin Cameron wrote a non-fiction book in 1999 about the threat of nuclear terrorism. So if that’s a subject that interests you, it’s the other guy you want to speak to.

I intended to make only one entry on the theme of paper, which turned into a second post. This entry will be a short third and final update on this topic, as I just keep finding more material.

I’ve discovered more notebooks, including some early drafts from my second novel, and a review of Tron: Legacy for my old LiveJournal blog. Once again, I’ve never reached the last pages of these pads. I find this rather strange, as I’m not the sort of person to leave a job half-finished. Once, I would have preserved them as they were, but I’ll use the other pages in the future if I need to.

My pencils are a different story. I have dozens of them around the house, and I don’t like to waste them. In fact, here are my two smallest ones joined by a rubber grip. I’ll use them until I physically can’t hold them any more: 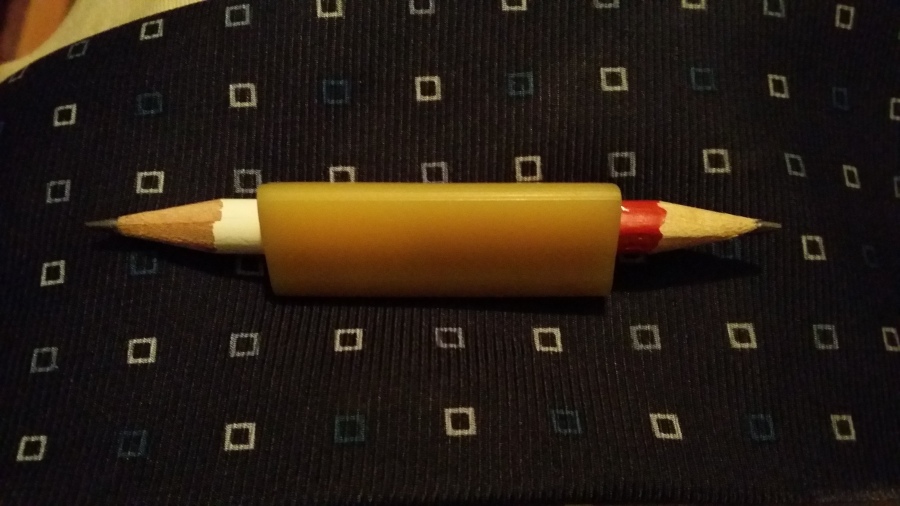 I’ve also discovered from Mental Floss that every new prime minister leaves a handwritten letter about what to do in the event of a nuclear conflict if both he and his assigned second-in-command are dead. It seems a little strange that such a format is still used. If I was PM, I’d make sure I spelled it out in 16-point Helvetica so the commanders aren’t standing around asking, “Does that say, ‘load weapons,’ or, ‘lower weapons?'”

More poignantly, ListVerse posted a collection of last words written by people facing certain death. Not all of them had the luxury of pen and paper, including the prisoner of war who scratched out a memorial on a rock, and a diver who wrote his on a slate.

Lastly, I’d like to show you the paper books I plan to read throughout the rest of the year, including modern writers such as John Twelve Hawks and Richard Dawkins, a selection of Penguin Classics, and a number of local anthologies:

If you want more information on any of these, let me know.

I’ve a feeling you’re getting sick of me talking about National Novel Writing Month, so I’ll devote only one paragraph to it. To date, my total is 48,711 words, meaning less than 1,300 to go until I hit the target. I have until Saturday to complete it, leaving plenty of time.

I’ve been going to two other classes at the same time, and I seem to be going through a rather philosophical patch as I complete their respective homework.

Class one is Life Writing at the University of Dundee. Our homework is to write a short passage about our lives each week, all focussing on a particular aspect of writing, which might be the use of the child or adult voice, or employing the past or present tense. This week was a little different, where we were asked to choose an abstract noun and write a piece around that theme. Mine was On Solitude, arguing that this is not the same as loneliness.

Number two is my regular writing class with Zöe Venditozzi, held at a new, secret location. One of the prompts led me to write about a floating island and the ideological arguments its inhabitants had when setting up their community. The other is about twins with wildly different reactions: one is always brutally honest, while the other goes into denial when he hears bad news.

Also, my second published story is currently being launched in Australia as part of the FourW Twenty-Four anthology. The Wagga Wagga and Melbourne events have taken place, but the Sydney launch happens this Saturday 30 November. It’s impractical for me to attend as I’m halfway around the world, but if you live there, pop along and let me know what it’s like.

When you speak to a lot of authors, it’s common to hear that they were always writing stories as children or experimenting with poetry as teens. However, I’ve only been writing for three years, since 29 October 2010, in fact. That was the day I signed up to National Novel Writing Month (NaNoWriMo) on a whim, since everyone else was doing it.

From high school until that point, I’d written hardly any fiction. Since then, I’ve entered NaNoWriMo every year and written dozens of short stories, many of them under the tutorship of Zöe Venditozzi, whom I’m sure would like you to buy her book. I’m also pleased to report that I’ve had a flash fiction piece published in The Fiction Desk, while FourW will publish one of my short stories next month. More on the latter when it happens.

Although I didn’t write fiction until three years ago, I have kept a blog for a long time, and it’s still a powerful way of spreading your message, even in these days of Twitter and Facebook. I don’t plan to give up my with ageing LiveJournal for my day-to-day activities, but I did want to start afresh with WordPress for discussing my writing.

I’m viewing this as an experiment, and it might not last. After all, the more you write about writing, the less time you have to write. But I hope I can whip myself enough to keep this place updated, and more importantly, to make sure you want to read it.

One final thought: I’ve used the tag-line Carry on for a long time, before that Keep Calm poster ever came out. I’m debating whether to have a tag-line at all, and if so, what should it be?