Last week, I made reference to an event called Make / Share, in which four people from different artistic disciplines were invited to talk on the subject of ‘Creativity and Self-Care’.

Each speaker gave biographical account of their practice and how each finds a balance between working and resting. Although each story was unique, they all had one factor in common: the artist had to suffer ‘burnout’ before striking this balance.

Mulling this point over afterwards, I was reminded of comments I made in the summer to some good friends that are believed we should be working longer hours in this country, as is common in places such as Japan and South Korea, and being more productive. My friends are great people, so while they thoroughly disagreed with my view, we didn’t fall out over the matter.

I apologised to them and retracted my comments in mid-November. Looking at said comments objectively, I realised they were right and that I’m the one with the problem. Over the last few months, I’ve read a few articles on workaholism and found I could answer ‘yes’ to many of the questions. I began reading the Helen Russell book The Year of Living Danishly and thought it sounded like a dystopian nightmare.

The trouble is that I don’t feel as though I have a problem. Here’s how I stand now:

As this writerly lark doesn’t pay very much, I also have a full-time office job. I have more than 26 hours flexitime credit, although I have reached the limit of 29 before, and the last time I took annual leave was in August, with no plans to take any more in the foreseeable future. I run a writing group that meets up every Tuesday and I was pleased to find out our venue is open on Boxing Day and 2 January so we wouldn’t need to take a break. I also have plans to continue writing my November novel and a potential sequel, as well as adapt a public-domain book into a screenplay. I have a target of sending 53 pieces to publishers each year, an average of one a week plus another for good measure. I’ve managed 43 thus far, so I’ll add the other 11 to the 2018 target.

Yet I’m far from burning out; I make a lot of time to see friends and I have a reasonable sleep most nights. It’s simply a case that I need to be working in some way, either in the office or outwith; it’s what keeps me sane. Even when I read a book or watch a film, it’s never entirely for enjoyment, but to comb it for structure and techniques.

Thanks in part to the Make / Share event, I now know the signs of burnout to look out for. Unless that happens, though, I’m going to keep doing exactly what I’m doing – even more if I can squeeze it in – because I’ve never been happier.

A couple of weeks ago, a friend posted her thoughts on LiveJournal about creativity and how she sometimes doesn’t feel as though her imaginative endeavours are noteworthy.

I found it oddly difficult to leave a comment under the entry. I do consider this friend to be creative, particularly in the way she bonds with people she knows well. Yet I’m surrounded by amazing writers, painters, dancers and so forth, and it’s rare to hear the word ‘creativity’ or variations thereof. I reckon that’s because we treat our chosen artistic fields as part of our daily lives, not something we make time for once our day-to-day work is complete. 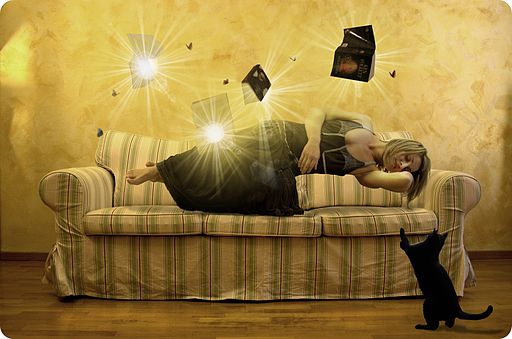 The C-bomb does pop up from time to time, however.

For the first time, I attended an event on Tuesday called Make / Share, in which people from different disciplines talk on a specified theme; this month, it was ‘Creativity and self-care’. Had it not been for someone else raising my interest, I probably would have seen the event and dismissed it, believing it was solely for those who work in crafts. In fact, the event featured people who dance, perform music and make films.

I was chatting with people I knew and didn’t know, and I felt quite at home there. Yet equally, I felt I was talking to such great folks that I had to improve my writing game, much like my LiveJournal friend felt about her endeavours.

I also think the intent of any creative project is another important factor. It’s usually easy to tell through someone’s work whether the intent is to express a view or emotion, or whether it’s to make something that looks pretty or sounds pleasant. When I began writing, I was in the second camp, and only later did I begin to express myself far more through my pieces. There’s nothing wrong with either approach, but nobody likes a ‘wannabe’.

On Saturday evening, I was invited to be part of a podcast with a small group of people. One of the participants was pleasantly surprised at how seriously the recordings taken, as she’d been accustomed to people who would talk grandly about what they would do but never followed through. The official podcast hasn’t yet been released. However, we did produce a couple of impromptu ones that were streamed live online. I prefer the second, an NSFW show recorded at 2am yesterday morning.

I think creativity is something we all do, whether it’s writing something personal in a Christmas card or helping a niece with homework, even if we don’t always use that term. And if you’re a regular reader of this blog, you’re probably not an aforementioned ‘wannabe’. Keep doing what you’re doing and try not to worry about whether it reaches someone else’s standards.

Last year, I completed an MLitt Writing Practice and Study degree. For the dissertation element, I had to submit a creative piece for 80% of the mark and a reflective piece worth 20%. In the reflective part, two references are juxtaposed:

The first book was written by naval administrator Samuel Pepys who lived in the 17th century, and the second is by the musician Peter Doherty from The Libertines who’s yet to reach his 40th birthday.

But the reason they’re referenced so closely together is that they both kept detailed diaries. My creative dissertation piece was in diary form and I used both books to figure out how I was going to structure my own work; for example, whether I should use exact or rough dates, how formal or informal the language should be, and so forth.

It was Doherty’s volume that I find particularly interesting since he uses it in three ways, sometimes on the same page: as a notebook for poetry and lyrics, as a scrapbook for pictures and paraphernalia he likes, and as a diary to document where he is and how he’s feeling. It effectively tells the story behind his work.

At the time of writing the dissertation, I was also trying to convey the story behind my own creative piece, albeit in more academic language.

I was reminded of this last week while listening to Creative Chit Chat Dundee, in which the dancer Gemma Connell was being interviewed; I’ve known her for a couple of years now. Out of a dozen subjects discussed that I could have picked up on, the one that interested me most was that she likes to keep a journal of her process.

During National Novel Writing Month (NaNoWriMo), I’ve been journaling in a limited fashion. My own notes were functional, mainly reminders or suggestions for the story, but I was also interviewed by the woman who helps me run our NaNoWriMo region, so she has a weekly record of my progress. I’ll report back when I listen to it.

With journal-keeping at the forefront of my mind, I’m going to experiment with the practice for my next major project. I’m planning to take the Doherty approach. The journal won’t be online; it’ll be handwritten and kept separate from the material I’m writing for the project. Once it’s finished, it’ll be interesting to look back and to see how the endpoint compares to the beginning.

National Novel Writing Month (NaNoWriMo) officially ended on 30 November, freeing up time to make more detailed entries here. And what a great deal has happened over the last seven days.

Let’s start off with NaNoWriMo itself. I’m pleased to report that I hit the 50,000 word-target on day 29, although I’m still writing the story. Our Tuesday meet-ups will also continue off-season, but not before a Thank Goodness It’s Over party tomorrow.

Meanwhile, I’ve been asked to write a guest blog post for NaNoWriMo on the theme of the ‘Now What?’ months, when the contest is finished and the novel needs to be edited. I found it more difficult than an ordinary blog entry because I wanted to stick as close to the theme as possible. I’ve yet to find out when the guest post will be published, but I’ll point you in that direction when I know.

Speaking of other blogs, I took a snap decision on Saturday to start using Tumblr again after a gap of four years, roughly when I began to use WordPress. I used to keep a weekly video blog there, but I gave it up because I didn’t have the time to generate content. The videos have disappeared because my Flickr account is closed, but the transcripts remain. Tumblr will now serve as an outlet for my Instagram photos, interesting content from other people, and original long-form blog topics that aren’t related to writing.

Another place I’m active is Twitter. Some weeks ago, the allowed number of characters was doubled from 140 to 280. Having had the chance to try it out for a while, I’m ambivalent about the change. On the one hand, a sense of Twitter’s core identity has been lost as you’re no longer forced to find inventive ways to comply with the cap. On the other hand, the relaxed limit comes into its own when I’m advertising our Hotchpotch open-mike events, and it’s now possible to squeeze in all the core points without relying on users clicking the link to our Facebook page.

But what about offline activities? There have been plenty of these happening too.

On Thursday, I was invited to a St Andrew’s Day celebration at the Dundee Maggie’s Centre to read Scottish poetry. My friend Erin Farley had pointed me towards, among others, a poet called Violet Jacob from the county of Angus. It was a challenge to read work written in her dialect, but I found it an ultimately rewarding experience.

On Friday, Erin was part of a line-up telling stories related to food while the audience enjoyed soup and bread; hers was a folk tale from Shetland. This event was held in the library – not a place where food and drink is normally encouraged – as part of Book Week Scotland. I wish I’d been able to take part in more events over the week, but it overlapped with NaNoWriMo and then I needed to complete tasks that I’d put off because I was writing.

I could go on for pages and pages about Saturday, but the condensed version is that I met the author Brandon Sanderson in Edinburgh and bought his short story collection Arcanum Unbounded. Unlike the two friends who came with me, I’m new to his Cosmere, the universe in which all his sci-fi novels are set. When I mentioned this, he pointed out which stories I should read first. He seemed such a genuine man and I can’t wait to start reading.

And yesterday, a little light-hearted relief at the University of Dundee as I watched the LIP Theatre Company present their retelling of the classic Cinderella tale in If the Shoe Fits. A hilarious, highly self-referential treat.